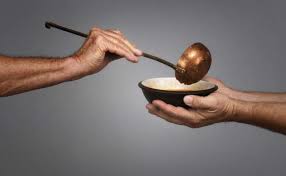 Every generation is faced with new problems. The good news is, that with every generation there also come solutions. My friend, Jackson who owns and operates a successful wedding catering company, donates a variety of supplies to a local homeless shelter.

He keeps the pantry at the shelter very well stocked. He is determined to only supply organic, non-GMO, fair trade food. I really applaud Jackson for putting out the extra cash, it’s about two-thirds higher in costs, but he tells me he sees it as supporting two causes at once.

He’s the kind of guy we all aim to be and his grassroots efforts come with the best of intentions. As a volunteer myself, I especially appreciate seeing the baby food section of a community pantry stocked with the healthiest of foods, unfortunately that is seldom the case.

So many of the supplies given to food pantries are donated by large grocery stores when they have a surplus. It’s a great act of kindness and probably a huge tax write-off, and more people are fed. Sounds like a good plan for what we presently have to work with, except I can’t help but wonder; is the quality of food hurting the recipients more than it is helping? You ask, how can keeping them alive be any better? – I say whenever possible opt to feed them wholesome foods to keep people alive healthier.

Since many Americans have to watch their food spending allowance they buy what they can afford. In a perfect world, we could all consider health over cost, but is that realistic today? The cheaper the food the more likely it is made up of cheap ingredients and fillers, dyes, chemical preservatives, but it fits in the food budget.

“We live at a time when the greatest Development Progress among the Global poor than at any other time in history” . . . from the Great Surge by Steven Radelet

He goes on to say that many of the problems that faced developing countries over the centuries are starting to lessen. More fresh water is available to millions compared to 50 years ago. More advances in medicine have reached corners of the planet where they barely had bandages not so long ago. More educational opportunities are open to women and there are less dictatorships and more democracies. It seems that humankind’s good efforts are starting to show up in measurable ways.

With that knowledge acting as a boost of confidence, I am happy to be a part of a growing number of health food advocates. I believe that change for the better on one level means change for the good on all levels. Reading in Radelet’s book that countries where people were now healthier meant the country was doing better overall. We may not see a complete change in our lifetimes, but at the rate the good is showing up, each generation will have the opportunity to choose a better, more nutritional lifestyle.

To stop feeding the poor, who live in more developed nations like the US, GMO’s, pesticides and chemical laden commodities, may be more difficult than feeding the rural tribes of third world developing nations. Perhaps they haven’t been as inundated by companies like Monsanto or Bayer. (to mention just two) yet. Or maybe these companies haven’t been allowed to prosper in some countries?

Does this sound like pie in the sky? – so to speak – Can we imagine being able to afford only healthy food for the underprivileged? Am I being too Utopian? Leave a comment below.